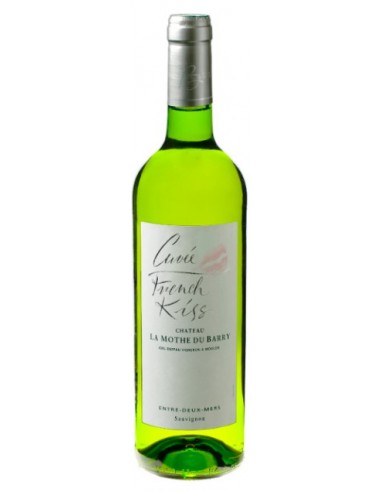 The French Kiss cuvée of Château La Mothe du Barry is produced from young vines - 15 years old on average - and two grape varieties in equal parts, Sauvignon Blanc and Sauvignon Gris, with just a touch of Muscadelle for freshness. The soils, located in the commune of Naujean-et-Postiac in the Entre-deux-mers appellation, are the famous boulbènes of the southwest, clay-silica soils prized for agriculture.

The vinification for the French Kiss is done in temperature-controlled vats and the wine is aged on lees until bottling. The wine is very aromatic, rich in flowers and white fruits. Fresh and light, it is perfect for the aperitif, to drink within 3 or 4 years.

It is in Moulon, in the family cradle (ninth generation of wine growers) that Joël Duffau settled in 1985. The vines are mainly located on the magnificent clay-limestone slopes of the commune: the promised land for Merlot. From his studies and internships in different wine regions in France and abroad (Burgundy, Beaujolais, La Rioja, California), Joël has kept an openness to others, an inexhaustible desire to discover, and a permanent questioning of his own.