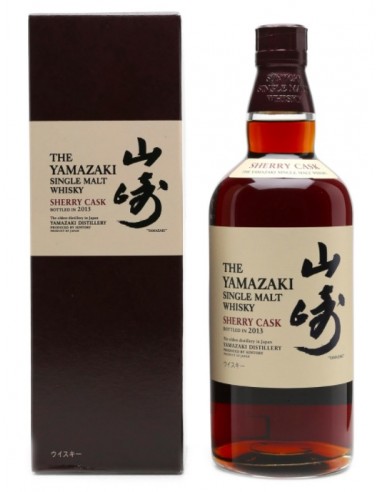 Discover the Yamazaki Sherry Cask 2013, voted best Whisky in the world in 2015.

This exceptional Japanese Whisky, of which only 2600 bottles were produced, comes from the Yamazaki distillery located in Shimamoto in the province of Osaka. Founded in 1923 by Mr. Masataka Taketsuru on the island of Hokkaido, it is the first historical distillery to be established in Japan.

Its founder studied in Glasgow before returning home with his Scottish wife. But he also brought back in his luggage the desire to make Whisky in Japan: he set up the Yamazaki distillery.

Today, the distillery is a reference in high-end whiskies and belongs to the Beam Suntory group.

In 2015, in Jim Murray's annual Whisky Rankings, "Yamazaki Single Malt Sherry Cask 2013" won the top prize, much to the chagrin of the Scotch Whiskies. With a score of 97.5/100 in Jim Murray's Whisky Bible 2015, this Whisky is described as "insanely deep and satisfying, exquisitely bold and of rare perfection".

Yamazaki Single Malt Sherry Cask 2013 is made from single malts that have been aged exclusively in Spanish oak casks, the famous "Sherry Cask". Mr. Shinji Fukuyo (the "Master Blender") has meticulously selected the single malts before blending them, making his work a true work of art.

This limited edition Sherry Cask is infused with intense spice and a fruity freshness. It offers a beautiful deep bronze color.

Sold in its box.