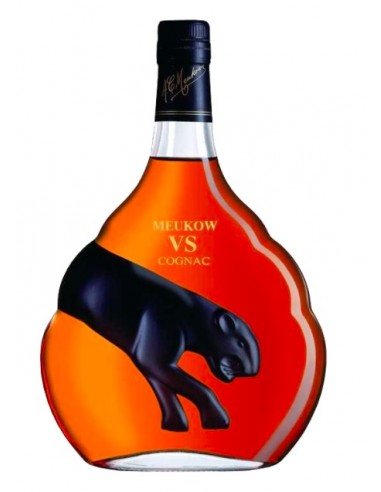 Meukow VS is characterized by a balanced blend of round fruity notes and delicate woody nuances. It has fruity and spicy top notes of almond and candied orange, with nutmeg and licorice in the background.

In 1850, Auguste-Christophe and Gustav Meukow, two brothers from Silesia, were sent to France by Tsar Alexander II to supply the Russian Court with brandies. After several trips, they decided to establish a commercial office in the town of Cognac in August 1862. After a rich history, the House of Meukow joined the independent family group Compagnie de Guyenne, founded in 1969 by Michel Coste. Since that day, Meukow cognac has continued to develop and expand its range. In 1993, the "Félin" bottle was created, decorated with the panther that has become the brand's icon. This superb animal perfectly embodies the strength, elegance and suppleness that are the intrinsic qualities of Meukow cognac.