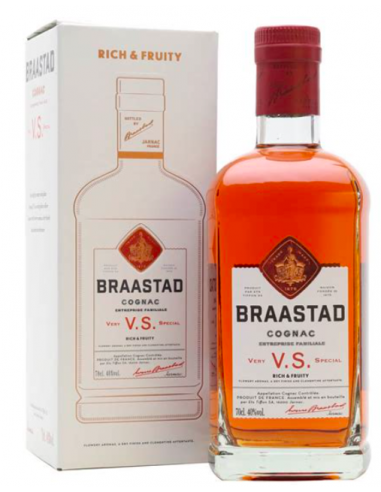 This VS Cognac is a blend of eaux-de-vie coming mainly from Bons Bois and Fins Bois. Some of them have been aged for 12 years in small Limousin oak barrels.

Rich and fruity, it offers notes of almonds, white flowers, with a creamy texture and a finish of clementine and citrus fruit.

Braastad Cognac started in 1875 when a young man, Médéric Tiffon, founded his very own House of Cognac on the southern bank of the River Charente, near the center of the village of Jarnac.

The name Braastad was introduced when Sverre Braastad from Gjøvik, Norway, married the daughter of cognac producer Tiffon, Edith Rousseau, in 1913, and took over Tiffon. He subsequently bought Château de Triac in the 1940s and lived there until he died, collecting firewood outside the castle at the age of 99. Him and Edith used to gather all their eight children and numerous grandchildren together for dinner every Sunday at the castle. It was an important tradition and there was no excuse for not showing up.

Five generations after Médéric Tiffon founded the company, and three generations after Sverre Braastad took over the reins, the family is still producing cognac in accordance with ancient laws and old family traditions. They are doing everything from harvesting grapes, producing wine, distilling cognac and maturing the noble, golden liquid for generations in their own humid cellars.